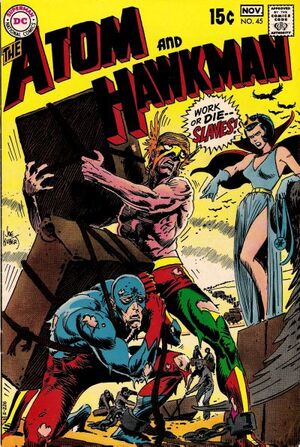 Appearing in "Queen Jean, Why Must We Die?"Edit

Synopsis for "Queen Jean, Why Must We Die?"Edit

Jean Loring sees the face of a killer she had unsuccessfully defended on everyone she meets, and goes berserk. Ray Palmer tries to help her, and discovers that his Alpha Energy machine is radiating unusually. He locks Jean in a room, while he investigates the source as the Atom. In doing so, he encounters a tiny armored warrior, and has his arm coated in silver, as well as being irradiated by another Alpha-Ray machine. His only choice is to become large again, whereupon he finds that Jean is gone. Ray calls Carter Hall for help, and they find the armor is the same as that found in Death Valley, apparently left by aliens, so they travel there and find identical alpha emissions. Atom figures that Jean is being held in a sub-atomic world there, and, using his lens-sizer (seen in Hawkman #9), shrinks Hawkman to sub-atomic size. They land on the radiation's source planet, where they are immediately attacked by robot birds piloted by a crazed Jean, and both are knocked out. They learn they are captives of the Jimberen, an ancient alien race which fled to this sub-atomic size to escape a plague on Earth. Recently woken from suspended animation, they now seek a new queen descended from their original Earth-born queen — Jean Loring— and drove her mad to remove woe and care from her mind. Atom and Hawkman are strapped in explosive harnesses and made slaves, until they fake a fall in the mountains, and escape. Freeing themselves, they find Jean, and Ray restores them to normal size. However, Jean is still insane.

Retrieved from "https://heykidscomics.fandom.com/wiki/Atom_and_Hawkman_Vol_1_45?oldid=1411828"
Community content is available under CC-BY-SA unless otherwise noted.