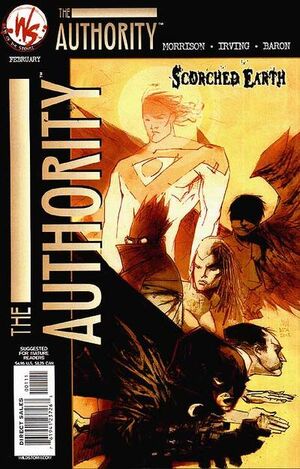 The Earth's Sun is suffering a major, potentially cataclysmic, upheaval. Its temperature is rising at an impossible rate and enormous solar flares are erupting from the photosphere, sending fireballs directly to Earth. The Authority finds out that Winter, the former field commander of Stormwatch Prime and an old friend of Hawksmoor's, is behind it. After he piloted SkyWatch into the sun, his energy absorbing powers made him become one with it. Trapped in eternal agony and enraged by the cruelty on Earth, Winter wanted to destroy it. The Authority are forced to cage him inside the sun.

Retrieved from "https://heykidscomics.fandom.com/wiki/Authority:_Scorched_Earth_Vol_1_1?oldid=1532932"
Community content is available under CC-BY-SA unless otherwise noted.