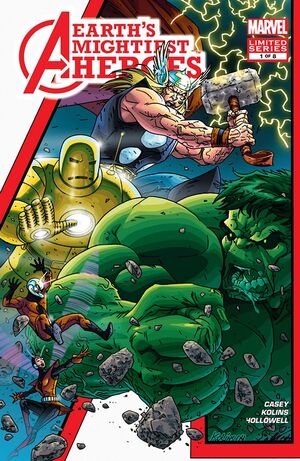 This eight issue limited series explores previously between and behind the scene events during the early days of The Avengers. Avengers:EMH #1 picks up after shortly after Avengers #1. Although Avengers:EMH #1 covers the period up to Avengers #4, none of the battles with Loki, SpacePhantom, or Sub-Mariner are directly depicted.

New Information Contained in This Issue

Retrieved from "https://heykidscomics.fandom.com/wiki/Avengers:_Earth%27s_Mightiest_Heroes_Vol_1_1?oldid=1658955"
Community content is available under CC-BY-SA unless otherwise noted.