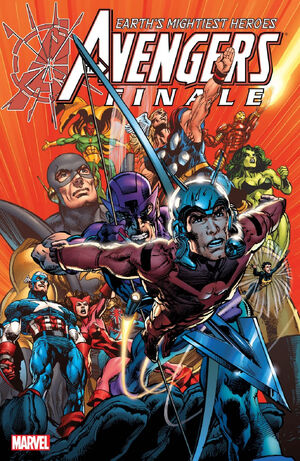 The Avengers have gathered in the ruins of Avengers Mansion, to lament their loss. Even worse, Iron Man says that he can no longer financially fund their operations, due to the massive amount of damages caused by the Scarlet Witch and their rejection from the U.N. However, their mansion will become a historical landmark.

The Avengers then begin to reminisce of the greatest parts of adventures, which include the founding of the team, the rediscovery of Captain America, the Kree-Skrull War, the marriage of the Vision and the Scarlet Witch, the fight against Korvac, the Masters of Evil and the Ultron Unlimited crisis. They then hold a toast to their fallen comrades.

As the Avengers walk onto the mansion balcony, they see countless people holding a candlelight vigil, to honor the Avengers for all they've done over the years.

Retrieved from "https://heykidscomics.fandom.com/wiki/Avengers:_Finale_Vol_1_1?oldid=1412037"
Community content is available under CC-BY-SA unless otherwise noted.