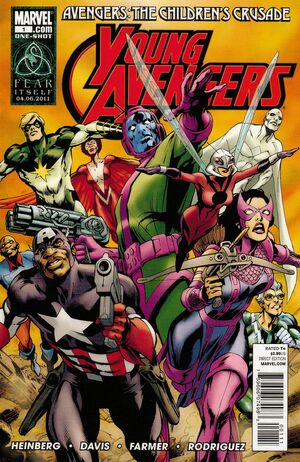 We became Young Avengers for one reason--and one reason only. Don't you remember?

Somewhere in the future, on the planet Moord, Iron Lad is battling his future self, Kang the Conqueror, vowing that he plans to undo every one of his conquests and every trace of his existence throughout time. Kang smugly states that every moment he spends in the timestream brings him closer to become him. Just before Iron Lad can land the killing blow, he is stopped by older versions of the Young Avengers; interestingly, Cassie Land/Stinger, has become Kang's lover, as he is Iron Lad, while the Vision has let go of his emotions.

However, Iron Lad notices that Wiccan is missing. He asks his friends where the Avengers are. Kang answers that the Avengers are hunting them throughout the timestream and won't stop until they're dead. Kang explains that years ago, they attempted to save the Scarlet Witch led to war with the Avengers, forcing them to escape through time itself, which resulted in the genocide of the Badoon. Iron Lad disagrees with their callousness and states that this isn't the reason they became Young Avengers.

In a flashback somewhere in the past, Iron Lad's newly assembled Young Avengers are battling holographic versions of the Sinister Six underneath Avengers Mansion. However, most of the team is more interested in going out and actually fighting villains than training. Iron Lad freezes upon seeing Kang, but Hulkling realizes that it's actually Mysterio. Seeing that he need to better prepared for Kang, Iron Lad tells his team to take the night off but everyone insists he come with them.

Unfortunately, the night didn't turn out to be so normal. They spot Electro and battle him. Iron Lad manages to use his armor's abilities to absorb and regenerate energy to overpower Electro. But when they assumed he was defeated, Electro gets back up, takes them by surprise and escapes. Though Iron Lad insists they go after Electro, the other notice a building on fire and race to the rescue. Subsequently, the Daily Bugle was unaware of their fight with Electro and the newly dubbed Young Avengers were put on the front page.

Back to the future, Iron Lad insists that protecting the innocents is why they became Young Avengers. Kang adds that allowing Electro to escape caused the breakout at the Raft prison. Iron Lad defends that event brought the Avengers back together. Kang cynically adds that included the belief that they should eliminate anyone in the way, including Wiccan. When he went to Latveria to save the Witch, the Avengers killed them both, forcing Kang to save his team.

Refusing to let that happen, Iron Lad time travels to save Wiccan. Unbeknowst to him, Wiccan is alive and has become the new Sorceror Supreme. In fact, Kang lied to him and had set events in motion that will transformer Iron Lad into Kang and destroy the Avengers forever.

Retrieved from "https://heykidscomics.fandom.com/wiki/Avengers:_The_Children%27s_Crusade_-_Young_Avengers_Vol_1_1?oldid=1430465"
Community content is available under CC-BY-SA unless otherwise noted.