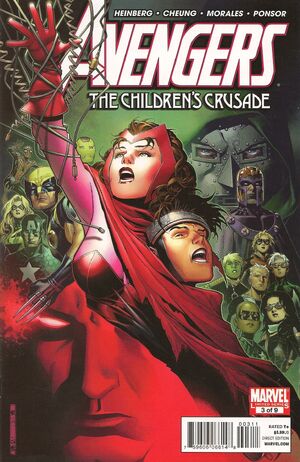 THE RETURN OF WANDA MAXIMOFF! The search for the Scarlet Witch is finally over as the Young Avengers find Wanda. But is she a hero or a villain? Is she still the Scarlet Witch? The battle over Wanda rages on as Avengers go up against the Young Avengers, Magneto clashes with Quicksilver, Wonder Man battles Wolverine, and the most powerful villain in the Marvel Universe conspires against them all so that he can possess Wanda himself.

Retrieved from "https://heykidscomics.fandom.com/wiki/Avengers:_The_Children%27s_Crusade_Vol_1_3?oldid=1648499"
Community content is available under CC-BY-SA unless otherwise noted.