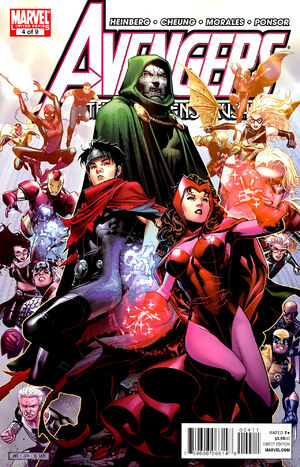 THE EPIC AVENGERS EVENT CONTINUES! Determined to rescue the Scarlet Witch from the clutches of Doctor Doom, Magneto, Quicksilver, and the Young Avengers form a covert strike force to infiltrate Doom’s kingdom. But their secret invasion of Latveria threatens to become an all-out war when the Avengers and Wonder Man stand in their way. PLUS: the Scarlet Witch comes face to face with an enemy even deadlier than Doom who won’t rest until Wanda Maximoff is dead.

Retrieved from "https://heykidscomics.fandom.com/wiki/Avengers:_The_Children%27s_Crusade_Vol_1_4?oldid=1639280"
Community content is available under CC-BY-SA unless otherwise noted.