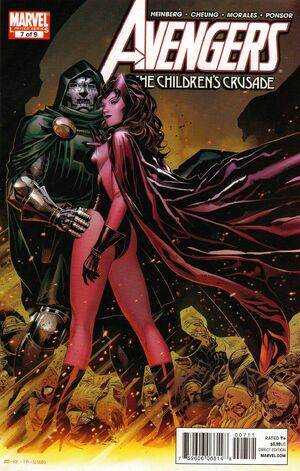 IT’S THE AVENGERS VERSUS THE X-MEN – with the Young Avengers and X-Factor caught in the crossfire -- as all four teams battle to determine who will hold the Scarlet Witch responsible for her crimes. Plus, when the origin of the Scarlet Witch’s godlike powers – and the secret history of her murderous rampage in “Avengers: Disassembled” -- are finally revealed, the truth creates a rift among the members of the Young Avengers that the team may not survive.

Retrieved from "https://heykidscomics.fandom.com/wiki/Avengers:_The_Children%27s_Crusade_Vol_1_7?oldid=1640713"
Community content is available under CC-BY-SA unless otherwise noted.