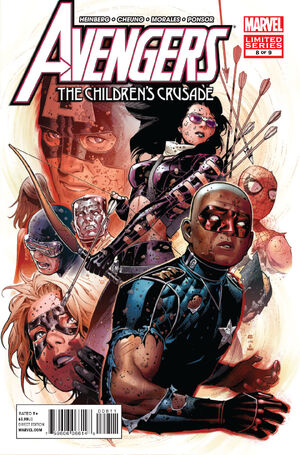 THE DEATH OF AN AVENGER.
The Young Avengers find themselves on the wrong side of the Scarlet Witch's reality-altering powers in their final battle against the combined forces of THE AVENGERS and THE X-MEN. In this penultimate issue of the epic maxi-series, the Young Avengers have no one to turn to except each other as they are forced to fight their lifelong heroes… to the death. Find out who lives and who dies.

Retrieved from "https://heykidscomics.fandom.com/wiki/Avengers:_The_Children%27s_Crusade_Vol_1_8?oldid=1652742"
Community content is available under CC-BY-SA unless otherwise noted.