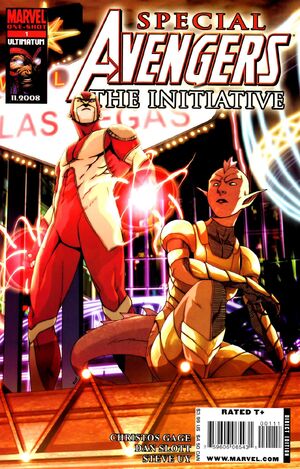 Appearing in "The Real Thing"Edit

One of the longest-running plotlines in Avengers: The Initiative is resolved at last! Hardball is among the Initiative's most respected and decorated graduates. He's become a celebrity hero in Las Vegas, with his true love, Komodo, serving nearby in Arizona. But all the while, he's secretly been in the pocket of the terrorist group Hydra! Now everything comes to a head as Komodo finds out the truth...Senator Woodman's evil plan comes to fruition...and Hardball must choose a side, once and for all! Also in this not-to-be-missed issue, Dan Slott returns to solo writing duties for the previously-untold origin of Trauma...and the shocking revelation of his link to a longtime Marvel character!

Appearing in "Fear for Your Life"Edit

Synopsis for "Fear for Your Life"Edit

Retrieved from "https://heykidscomics.fandom.com/wiki/Avengers:_The_Initiative_Special_Vol_1_1?oldid=1488892"
Community content is available under CC-BY-SA unless otherwise noted.