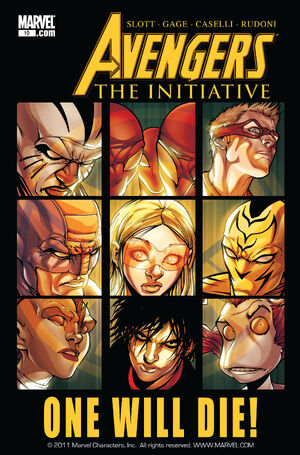 A few years ago, after the New Warriors foiled a Badoon invasion, the team welcomes Ultra Girl and Slapstick into their team, giving them communicators. Slapstick then tries hitting on Namorita; she attempts to pound him only for Firestar to restrain her.

In the present year, three days ago, Slapstick interrupts Debrii's expressed concern about Justice going AWOL, which has everyone pointing eyes at the former New Warriors. Rage expresses that he feels that it is because he was the prime suspect in the mysterious beating of the Gauntlet; Slapstick attempts to confess about him being the attacker, only for his teammates to interrupt; Rage swears to beat the stuffing out of the culprit. Then suddenly, a beeping starts coming from Slapstick's infinite pockets. He pulls out a variety of trinkets and other junk before finding his New Warriors' communicator. When he switches it on, Justice's voice comes out, saying that he is onto what happened to MVP but doesn't disclose anything else without risking the Camp tracing his communication. He asks his teammates to meet him in Tennessee.

Elsewhere, at Cadet Barracks Bravo, Cloud 9 rushes to get reinforcements. When she opens the door, she finds the men's bunks empty, so she looks to the girls' side, only to find Hardball and Komodo fraternizing.

Down in the base's subbasements, KIA is looking for the Gauntlet, ready to kill one of those responsibly for his progenitor's death. However, he diverts to Gyrich, slaughtering his way through S.H.I.E.L.D. agents to get to him. Only the Shadow Initiative's intervention saves Gyrich from death. KIA retaliates by severed Constrictor's arms. The Scarlet Spiders attempt to calm him down by unmasking, showing that they're one and the same. Unfortunately, KIA reacts badly, decapitating Van. Mutant Zero then somehow convinces KIA that Gyrich has vanished. Then, Gauntlet crashes in, being controlled by said alien device on his right arm and talking in an alien language.

In Yellowjacket's lab, Baron von Blitzschlag absorbs some electricity from an expose wire, regaining the strength to stand on his feet. He then notices the destroyed clone vat. He marches over to one and start tinkering with the wires in the vat.

Back in the war room, KIA and Gauntlet fight. The former pushes Gauntlet through the wall and out into the open, where outside, a squad of heroes are waiting. KIA responds by firing on them, grazing each hero. The Gauntlet then slams into him. KIA refuses to fight the alien intelligence and stabs Gauntlet in the side, bringing him back to his senses. KIA then declares that it is his fault for allowing him to exist. The remaining Scarlet Spiders jump in just in time before KIA could kill him.

Cloud 9 is pulled aside by Blitzschalag, giving her a device that would reprogram KIA. Unfortunately, they need the brain patterns of a healthy MVP; the Scarlet Spiders are no substitute, as they have Blitzschlag's DNA mixed with theirs. There is a way to get to the "real" MVP, whom Blitzschlag had implanted a tracking chip in.Cloud 9, Hardball and Komodo race to the Negative Zone jump gate to get to Tennessee, where they spring up "MVP" and his father. But before Cloud 9 could place the device on MVP's head, claiming that it's for the greater good, someone shouts disgust about the "greater good", as the trainees are attacked. Their attackers are revealed to be the reformed New Warriors.

Retrieved from "https://heykidscomics.fandom.com/wiki/Avengers:_The_Initiative_Vol_1_10?oldid=1410281"
Community content is available under CC-BY-SA unless otherwise noted.