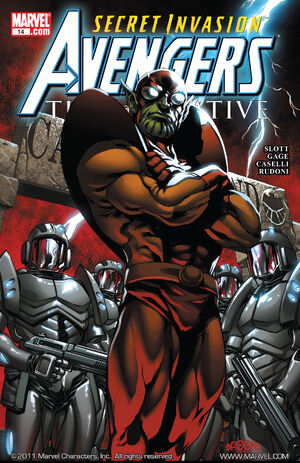 See these goggles? They're old school. And nothing - beats old school!

Appearing in "We Have Met the Enemy, and They are Us!"Edit

Synopsis for "We Have Met the Enemy, and They are Us!"Edit

It begins with a flashback to several months ago; Yellowjacket was on the top of the HYDRA Terrorcarrier as it crashed in Texas. As his team-mates leave him to his fate, he reveals himself as a Skrull. He survives the crash using the powers of the Vision, then tells everyone that he shrunk to subatomic size to escape the blast. He is amazed that everyone believes him. Despite his position as a spy, he is amazed at the lengths and depths to which Baron von Blitzschlag and HP Gyrich were willing to go to staff the Initiative. And when their efforts backfired, he used the powers of Black Panther and Quicksilver to escape death once again. He tells everyone that he shrank to subatomic size to escape the blast. However, his choice of strawberries and pickles at mess, to create the taste of Skrullian t'manja berries, leads Crusader, a rogue Skrull, to find him out, due to his fondness for the same mix.

On his way to the base of the Hawaiian Initiative team, 3-D Man thinks about a package he got at his graduation from the two men who wore the mask before him. It contains the suit one of them was wearing when he first got his powers. Lamenting that he cannot wear the black jumpsuit, 3-D Man opts instead to wear the suit's golden goggles instead of his suits eyewear. Meeting his new team, 3-D Man is introduced to local hero Star Sign, earth elemental Paydirt, the monster hunting Devil-Slayer and the ferrokinetic Magnitude. However, his goggles reveal Magnitude as a Skrull. Reacting, Magnitude attacks his team-mates using the powers of Sunfire, Havok and Banshee. However, thanks to the goggles, 3-D Man kills him; as he dies, Magnitude cannot understand how 3-D Man can see him, saying, "We improved... We can't be detected by Earth magic, powers or science." With their base now trashed by the fight, Devil-Slayer teleports 3-D Man back to Camp Hammond to warn everyone of the impending threat.

In Camp Hammond, Crusader decides to tell Trauma that Yellowjacket and he are both Skrulls. But he leaves at the last minute, causing Trauma to wonder what he's hiding. As Crusader walks away, 3-D Man appears in the courtyard, babbling that he can see Skrulls. Panicking, Crusader uses his Freedom Ring to hide himself, breaking the goggles. As 3-D Man recovers, the scene that greets him is horrific - the goggles read every member of the Initiative as a Skrull!

Retrieved from "https://heykidscomics.fandom.com/wiki/Avengers:_The_Initiative_Vol_1_14?oldid=1519433"
Community content is available under CC-BY-SA unless otherwise noted.