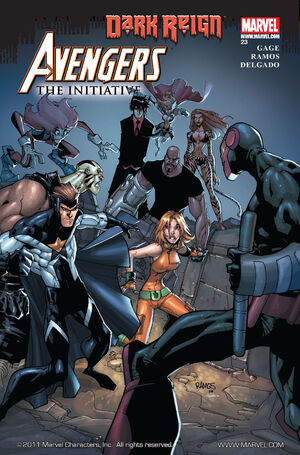 Counter Force has exposed the Initiative's misuse of MVP's body for their own purposes; the surviving Scarlet Spider unmasks as proof. Unfortunately, Osborn is watching and considers this perfect. The media asks the Gauntlet if he can confirm this; he could only avoid the question; Ultra Girl even confesses.

In Madripoor, the Shadow Initiative has been cornered by a Hydra squad, lead by Hardball and Carmilla Black. Hardball tells his former comrades that if they are smart, then they'll surrender; Komodo is sure that he is being mind controlled. However, she is goaded into charging. Hardball then fire a S.P.I.N. tech dart at her, reverting Komodo to her human form. He reveals that when he stole the S.P.I.N. tech, Hydra improved it, so that it could work on any superhuman. Therefore, the Shadow Initiative decides to scram. Unfortunately, they lose Komodo, who gets captured. Worse, because S.H.I.E.L.D.'s been disbanded, there is no evac for the Shadow Initiative. Unbeknowst to them, Roughouse and Bloodscream are right behind them.

Back at Camp Hammond, the Tigra asks Gauntlet if he knew about MVP's death. Also, Doc Samson states that if they didn't leave the Thor clone intact, then people would've been killed. Gauntlet defends that it was on Gyrich's orders, as well as the Skrull Pym's. The only other person who knew about the incident was Baron von Blitzschlag, who is currently mourning his "son", the second Scarlet Spider. Just then, Osborn's plane lands. He announces that in light of these recent events, he is closing down Camp Hammond, allowing the angry citizens to ransack the place. He promises that he will reorganize the Initiative.

Retrieved from "https://heykidscomics.fandom.com/wiki/Avengers:_The_Initiative_Vol_1_23?oldid=1410294"
Community content is available under CC-BY-SA unless otherwise noted.