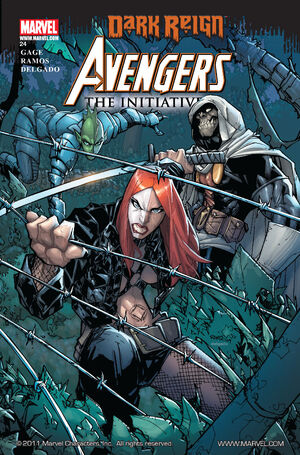 Fired? Heh. I'm afraid you misunderstood. I'm not firing you. Quite the opposite, in fact. Taskmaster...how would you like to run the Initiative?

The Gauntlet's family is packing, due to Camp Hammond's closure. He listens to wife saying that Osborn is a bad man. Then, Bengal's wife comes running up to him, concerned for her husband. However, as the Shadow Initiative officially doesn't exist, there's no way they can send a rescue.

In Madripoor, the Shadow Initiative is tangling with Roughouse and Bloodscream, two of Hydra's hired goons. Typhoid Mary decapitates the latter but the vampire simply puts his head back on. He uses her pyrokinetic powers to ward him off but is slowly losing her mental integrity without her Zero Room. Taskmaster attempts to make nice with Hydra by saying they was to defect to their side.

Back in New York, Gauntlet is demanding to know if anything is done about rescuing the Shadow Initiative. Osborn promises that he'll get them home safe. However, he has no idea what Gauntlet's talking about and has his assistant Victoria Hand find out.

The Shadow Initiative arrives at Hydra's underground base, where Taskmaster attempts to sweet-talk Hardball. Hardball orders them to be placed in holding cells. However, when they pass through the armory, the Shadow Initiative turns on Hydra and attempt to contact H.A.M.M.E.R. Hydra agents then charge in, attempting to use the S.P.I.N. tech darts to disable them. Mary uses her pyrokinesis to melt the darts and the agents.

Elsewhere, Komodo wakes up to find herself legless and sitting in a couch; Hardball didn't think that she'll run away. The only reason she is alive is because Hydra wants the regenerative formula in her blood. She snaps that they never heal his brother, and his family is considering outcasts. Then, a sudden explosion gives Hardball a sigh of relief as he leaves Komodo cursing him.

The Shadow Initiative had blasted a hole in the wall leading to Madripoor's forests. Mary, with her mind slowly fracturing, runs out into the wild, intending on being a diversion. The others attempts to race to grab the S.P.I.N. tech. Unfortunately, Hardball and company aren't going to stand for this. Scorpion orders both Roughhouse and Bloodscream to charge ahead. However, she prevents Hardball from following suit, revealing that she knows that he is no more loyal to Hydra's cause than she it; Scorpion is in fact her to bring Hydra down from the inside. However, she refuses to disclose who she's working for. She admits that she likes the real him and gives hi ma goodbye kiss.

Meanwhile, Taskmaster realizes that they can use the S.P.I.N. tech to cancel out their opponents' powers. Unfortunately, Hardball has destroyed every dart except for his soon. He then discovers that Scorpion swiped it off him. Just then, Roughouse rears in pain and Bloodhouse explodes as Ant-Man increases in size -- from inside the him.

Constrictor corners Hardball, who surrenders, revealing that he only wants Komodo to be safe, just as H.A.M.M.E.R. arrives.

Later, at Avengers Tower, Osborn congratulates the Shadow Initiative on a job well done. Komodo also asks about what happened to Hardball; Osborn says that he's being sent to Negative Zone prison 42, which is considered impenetrable. He then tells them all that dinner is on him. However, he has a talk with the Taskmaster, telling him that him that he wants him to run the Initiative.

Retrieved from "https://heykidscomics.fandom.com/wiki/Avengers:_The_Initiative_Vol_1_24?oldid=1410295"
Community content is available under CC-BY-SA unless otherwise noted.