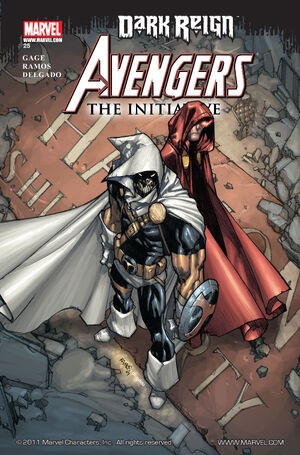 Ladies and gentlemen. My Avengers of tomorrow. Welcome to the future of the Initiative. Welcome...to Camp H.A.M.M.E.R!

The New Warriors have had a bad day. While rescuing the corpse of MVP, Michael the Scarlet Spider was killed. Hoever, it gets worse - Mr van Patrick cannot stand the New Warriors because they helped perpetuate the lie about the circumstances of MVP's death. They understand and the heroes depart, leaving Mr van Patrick and the first clone of MVP. Justice is not optimistic about their chances, but Night Thrasher, as the manager of the Taylor Foundation, has access to everything they need...

Norman Osborn's plan to reformat The Initiative is underway. Taskmaster will train the villains to behave like heroes for the sake of the cameras. However, without some genuine heroes in the bunch, people will become suspicious. Hence, their first recruit: Robert Baldwin, aka Penance. Drugged into catatonia, he is easily directed into subservience with the memory of the Stamford disaster.

Tigra has an appointment with Norman Osborn. He knows that she has a half-Skrull child (thanks to her affair with "Yellowjacket") and he wants her to have an abortion so his scientists can study it to make anti-Skrull bioweapons. Ms Marvel will escort her home until he decides whether she will have the abortion - or carry the child to term and watch it get abducted by HAMMER anyway. When Tigra threatens to go public, Osborn points out that she's carrying an out-of-wedlock baby with direct ties to the aliens that recently tried to invade Earth. He also offers her a career as a solo hero, since the Initiative's new head officer will be The Hood - the man who brutalised her and threatened her mother. She leaves in anger.

Osborn's next appointment, The Gauntlet, is to be reassigned to the military in the Middle East. However, Osborn wants the Gauntlet's power fist, and is willing to have Ares remove his arm to do it.

On the plaza outside Avengers Tower, Ms Marvel is whining about the state of her costume, when Ares is tossed out of a high window. Tigra tries to get her to leave, but when that fails, Tigra destroys the front her costume, then runs away as the unimpeded view of Ms Marvel's chest draws people with cameras. She and the Gauntlet team up on the lam, but the Hood has a plan - send his tracker, The Griffin, on the heroes, along with a few villains.

The Hood and Osborn go back to finding people who will stay with the Initiative during this changeover. They peg Diamondback as an opportunist, due to her history of changing sides - and it seems they are right.

Trauma plans to leave, but the Hood has an ace in the hole - he knows the source of Trauma's powers. Trauma is the secret son of Nightmare, ruler of the dream dimension. He formed the basis of Mrs Ward's nervous breakdown. The Hood can heal Mrs Ward, but their will be a price - Trauma must stay in the Initiative. Trauma accepts.

Their next appointment is with Prodigy. In exchange for leadership of the Nevada Initiative team, he swears allegiance to Osborn. The current leader of the Nevada team - Gravity - is shipped off to Wisconsin.

In the New York sewers, Tigra and the Gauntlet are on the run. The villains catch up with them, but they are rescued by the New Warriors, who hope to form a resistance against Osborn. Tigra points out that, with her, Rage and Justice, they can lay a claim to the Avengers name.

In New Mexico, Osborn leads the people who accepted a place in the Initiative to their new home: Camp H.A.M.M.E.R.. A new era has dawned...

Retrieved from "https://heykidscomics.fandom.com/wiki/Avengers:_The_Initiative_Vol_1_25?oldid=1410296"
Community content is available under CC-BY-SA unless otherwise noted.