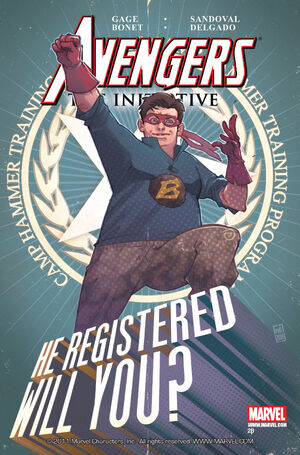 In Nevada, the Heavy Hitters are having an internal struggle - Nonstop believes that new member Outback is less of a hero than advertised, but her team-mates are trying to talk her around. A news crew, seeing the fight, start asking questions, and Outback accuses Nonstop of skimming money from the team's casino. However, for Prodigy, this is the last straw, and he knocks Outback unconscious, revealing him as the mercenary known as Boomerang. Prodigy has had enough of Osborn's control of the Initiative, and announces that the Heavy Hitters will now leave the Initiative. This is news to both the Avengers Resistance - who immediately leave to join these new allies - and Norman Osborn. He, the Hood, and Victoria start taking notes for the group that will take them down: the Shadow Initiative, the Force of Nature (from Oregon) and Freedom Force (from Montana). The Hood leaves to arrange matters, while Osborn looks over PR related to the Initiative's efforts reclaiming Number Forty-Two, the Negative Zone Prison. Constrictor and Butterball are easy, but others will require more "creative writing", like Penance and Hardball, who is back on the team.

However, this does not sit well with Komodo, Hardball's ex-girlfriend, whom he betrayed when he left the team to join Hydra. Taskmaster is adamant - Hardball is a good fighter, and his amoral actions mean that the Initiative is willing to deal with him. Komodo lays out an ultimatum - Hardball goes, or she does. Taskmaster responds that if she goes, they will have to remove her superpowers, returning her to her crippled state. And Taskmaster thinks she value her mobility over her scruples.

Three hours later, Komodo is no longer a member of the Initiative, leaving Camp H.A.M.M.E.R., legless, on a wheelchair.

On the Avengers Resistance's airplane, Ultra Girl must talk to Justice about their relationship and the knocks their family's reputations have taken in the face of Osborn's PR campaign. Justice doesn't think they should be together anymore, considering what they're doing. Justice points out that, of the other five teens who founded the New Warriors with him, only Nova is doing well these days. Firestar decided to become a student, Night Thrasher and Namorita died at the Stamford Disaster at the start of the Civil War, and Speedball disappeared soon afterwards. Justice just isn't sure that he's doing the right thing, and until he is, he can't share his life with anyone else. Ultra Girl doesn't like it, but she vows to remain his friend.

Later, in Las Vegas, the Heavy Hitters are waiting with a camera crew to take whatever the Initiative throws at them. The first wave of attack is the Force of Nature, Prodigy tries to talk their leader, his friend Sunstreak, but they plow in and attack the heroes. The Heavy Hitters manage to beat their foes, but the second wave arrives, consisting of the U-Foes, the Shadow Initiative and Freedom Force. From a safe distance, Taskmaster co-ordinates the battle, and orders Cloud 9 to kill Prodigy with a sniper rifle. But as she debates this in her own head, Prodigy is revealed as... Slapstick in disguise. At this, the Avengers Resistance emerge from hiding and join the Heavy Hitters. Taskmaster orders Cloud 9 to shoot, but she "accidentally" hits the wall next to Night Thrasher's head. Taskmaster, however, is no slouch, and takes down Night Thrasher with a shot to the head.

This is the turning point - Justice falters in his fight with fellow telekinetic Vector, which allows the Initiative forces to take the upper hand. Prodigy arrives, and tells Justice he can't win this fight. Justice takes everyone else and runs. Prodigy stays behind to hold off the villains, and gets beaten down. The news crew were kept away, but Tigra has a video of Prodigy getting overwhelmed, which she intends to upload to Youtube at her earliest convenience.

Later, at a safehouse, the Avengers Resistance have used their contacts in the Mighty Avengers to arrange a way out of the country for Nonstop and Telemetry. Debrii announces that she will be joining them. She first got into superheroics for the fame, but she realises that if her choices are Osborn's Initiative or the Avenger Resistance, then she is better getting out now. She wishes them luck and departs.

At Camp H.A.M.M.E.R., Trauma is facing a recurring nightmare in which he lies to Penance about his past and tries to keep him a mindless drone. It troubles him. And this is pleasing to a mysterious entity that trades in nightmares...

Elsewhere in Camp H.A.M.M.E.R., Night Thrasher, unexpectedly, wakes up. It seems that the design of his bulletproof helmet has saved his life, but Norman Osborn, the Hood, and Baron von Blitzsclag have an offer - he will work for them, and in exchange they will resurrect his brother Dwayne...

Retrieved from "https://heykidscomics.fandom.com/wiki/Avengers:_The_Initiative_Vol_1_28?oldid=1410299"
Community content is available under CC-BY-SA unless otherwise noted.