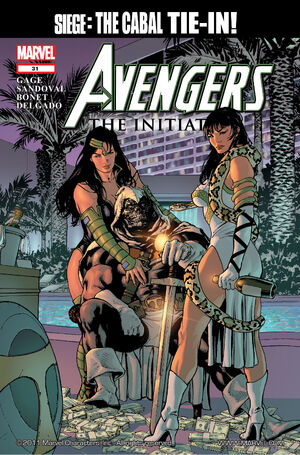 A SIEGE: THE CABAL TIE-IN! Months of story threads finally weave together as Norman Osborn offers Taskmaster a seat at the Cabal's table...the Avengers Resistance uncovers a horrifying secret...and members of the Initiative are called up for an assault on an enemy of incalculable power!

Retrieved from "https://heykidscomics.fandom.com/wiki/Avengers:_The_Initiative_Vol_1_31?oldid=1729330"
Community content is available under CC-BY-SA unless otherwise noted.