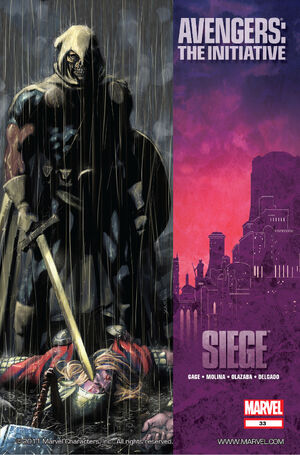 The Initiative faces its own CIVIL WAR as Taskmaster, Constrictor and Diamondback join the Dark Avengers in the Siege of Asgard...and come face-to-hammer with Thor! Meanwhile, Justice, Tigra and the rest of the Avengers Resistance assault camp H.A.M.M.E.R., aiming to bring it down once and for all — but the Hood is ready for them! It's all-out war on two fronts — and one side won't be here when it's over!

Retrieved from "https://heykidscomics.fandom.com/wiki/Avengers:_The_Initiative_Vol_1_33?oldid=1730080"
Community content is available under CC-BY-SA unless otherwise noted.