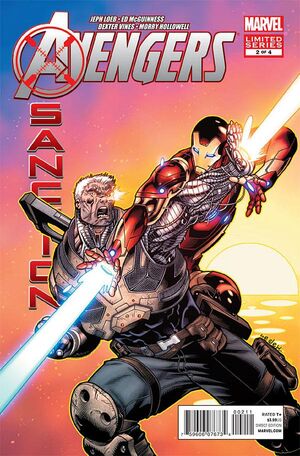 Iron Man and Red Hulk are fighting with the remaining members of the Lethal Legion, Living Laser and Radioactive Man. After they subdue the villains, Iron Man notices Red Wing flying alone. He goes after the bird in hopes of trying to find Captain America and Falcon. He arrives at the docks where he finds Steve Rogers in a inhibitor chair invented by Magneto.

He is then attacked by Cable, who is using parts of an Iron man armor from the future. Taking the fight to the Hudson River, Cable is unable to keep the Techno Organic virus that's killing him in check and Stark attacks him relentlessly. Knowing that every armor he has or ever will construct are based on the original Stark data code, he tries to shut it down. But Cable rewrote the codes using the Askani language that was only spoken in the future. Tony Stark is then defeated and was put in another inhibitor chair alongside Captain America, and Falcon who was in the Weapon X tube.

While Cable explains to Iron Man that he's using anti-mutant weaponry against the Avengers. He is then shot on the back by the Red Hulk. Fighting the pain of the Hulk's shot and the Techo-Virus, Cable remembers his daughter Hope, and lets himself be consumed by the virus so that he can have the strength to battle Red Hulk.

During the entire battle Cable remembers conversations with Hope in the Future where he explained to her what was like living with the Tech-Virus inside of him, and made the promise that he will never leave her and will always be there to protect her.

Retrieved from "https://heykidscomics.fandom.com/wiki/Avengers:_X-Sanction_Vol_1_2?oldid=1412124"
Community content is available under CC-BY-SA unless otherwise noted.