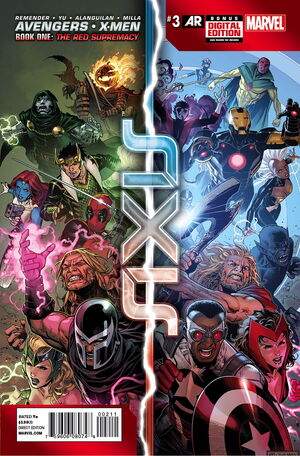 ACT I: THE RED SUPREMACY

• With the heroes lost, the world’s fate lies in the hands of the vilest syndicate known to man.

• Scarlet Witch is forced to join Dr. Doom, the man who unleashed her power to cause M-Day, or she will watch those she loves most die.

• The return of one of the Marvel Universe’s great villains!

• An Avenger quits, a heart is broken, and the world as we know it is gone.

Retrieved from "https://heykidscomics.fandom.com/wiki/Avengers_%26_X-Men:_AXIS_Vol_1_3?oldid=1647217"
Community content is available under CC-BY-SA unless otherwise noted.