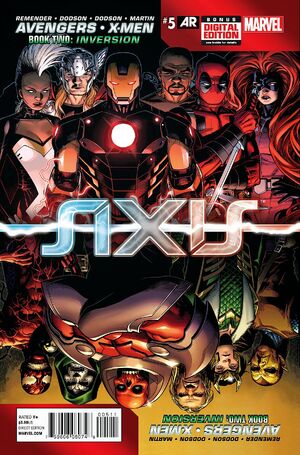 Spider-Man hazes Nova on the way to an Avengers assembly, which is brought to a halt when the Unity Division arrives. As Sam Wilson accuses one of the attendees of jailbreaking the Red Skull, Spider-Man's Spider-Sense goes off and he tackles Nova out the window just as all the Avengers vanish, having been shrunk with Pym Particles and imprisoned in Hank Pym's ant farm. Spider-Man instructs Nova to fly them to safety, but they are attacked by Queen Medusa and Captain America. Magneto rescues them and tells them that he is on their side. At the Avengers Tower Luke Cage motions that the Unity Division move against the X-Men and Inhumans, outraging Medusa, but the argument is interrupted by Captain America's return. Having no further use for her former allies, Scarlet Witch leaves to seek revenge on her father. Magneto takes Nova and Spider-Man to Steve Rogers, explaining that the Inversion spell affected not only the Unity Division of the Avengers, but the X-Men as well. Rogers calls up footage of a rampaging Kluh near Sam Alexander's hometown, and Nova departs to fight the "Hulk's Hulk". At the Avenger's Tower, Captain America muses over the future of the world to Wasp, who he has hooked up to a machine that extracts her Pym Particles, and states that the world needs a tyrant and that he is the best candidate. The X-Men, led by the new Apocalypse, arrive and attack Avenger's Tower looking for the Red Skull, and when they find he is gone they brutally beat Wilson, proclaiming their intent to conquer New York and issuing an ultimatum that all humans be evacuated within three hours or perish.

• Steve Rogers enlists Spider-Man and Nova for an impossible fight.

• The new Sorceress Supreme comes for revenge on Doom.

• Iron Man vs Daredevil for the fate of an infected San Francisco.

• The Axis of Evil strikes down the heroes of the Marvel Universe!

Retrieved from "https://heykidscomics.fandom.com/wiki/Avengers_%26_X-Men:_AXIS_Vol_1_5?oldid=1649650"
Community content is available under CC-BY-SA unless otherwise noted.