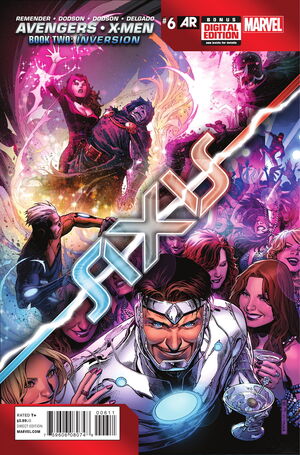 After broadcasting a warning for humankind, the X-Men, who had created a gene bomb designed to kill those without the X gene in their body, were confronted by Mystique, who attempted to make them see the errors of their ways. Rogue and Nightcrawler confronted her, and forced her to leave with Sabretooth. Meanwhile, in San Francisco, Daredevil confronted Tony Stark about having unleashed Extremis, and the problems it caused to society. Tony surprised Matt with increased agility and strength, and beat him up before throwing him from his headquarters. In Latveria, Doctor Doom declared that he was but a man in the eyes of God and claimed his desire to try democracy on Latveria before he was attacked by the Scarlet Witch, who wanted revenge for having tampered with her and indirectly caused the House of M. He was saved by Quicksilver and Magneto, who stated Wanda would never recover from killing Doom if she did so. In Las Vegas, Loki tried to unsuccessfully make his brother Odinson listen to reason, and had to be saved by Steve Rogers, Nomad, and Spider-Man in the Quinjet. After returning with Loki to the Avengers Mansion, Steve revealed that he had assembled the solution to deal with the inverted Avengers and X-Men: he had reassembled the team of inverted super villains into the Astonishing Avengers.

• The Axis of Evil have won, who is left to stop them?

• Rogue and Nightcrawler vs Mystique!

• Magneto and Quicksilver vs The Scarlet Witch!

• This is it, the face of the new world disorder--The Astonishing Avengers are formed!

Retrieved from "https://heykidscomics.fandom.com/wiki/Avengers_%26_X-Men:_AXIS_Vol_1_6?oldid=1642351"
Community content is available under CC-BY-SA unless otherwise noted.