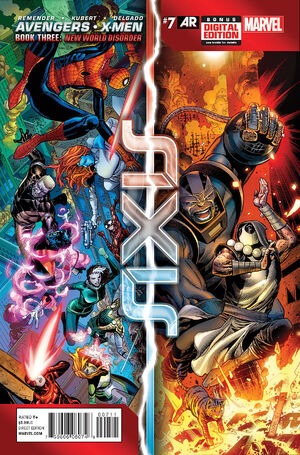 As the Astonishing Avengers stormed Apocalypse's ship and fought the X-Men, Zenpool and Spider-Man attempted to sneak past Apocalypse and try to defuse the gene bomb. Zenpool attempted to distract Apocalypse while Spider-Man deactivated the device, but both failed and were thrown outside the ship, where they joined the ongoing battle between the X-Men and the Avengers.

Meanwhile, in Latveria, the Scarlet Witch unleashed her power to fight Doom and seemingly killed both Quicksilver and Magneto, as well as discovering she actually had no blood ties with the Master of Magnetism since a curse she threw at her bloodline only affected her brother, before forcing Doctor Doom to flee. In San Francisco, Captain America arrived to Iron Man's Stark Island, where the Armored Avenger introduced him to the reassembled inverted Avengers and Medusa, willing to join forces once again upon learning Steve Rogers was looking for the Red Skull to reverse the inversion.

Back to Manhattan, Deadpool kept trying to reason with Apocalypse, but in the end he was beaten and beheaded, thus defeated like the rest of the Astonishing Avengers. As Apocalypse claimed his victory, the gene bomb's countdown was almost finished.[1]

This is it! The battle royale of your dreams--the Astonishing Avengers vs the Uncanny X-Men for the fate of New York!

Retrieved from "https://heykidscomics.fandom.com/wiki/Avengers_%26_X-Men:_AXIS_Vol_1_7?oldid=1647220"
Community content is available under CC-BY-SA unless otherwise noted.