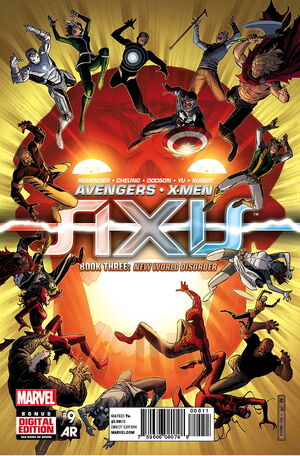 • Who will live? Who will die? Who will remain inverted? A shocking climax that promises to crack the Marvel Universe to its very core!

• An old foe must claim the mantle of his greatest enemy to save the lives of all he cares for!

• An X-Man’s horrifying fate! An Avenger’s appalling choice! If you read only one comic this century – This is it!

Retrieved from "https://heykidscomics.fandom.com/wiki/Avengers_%26_X-Men:_AXIS_Vol_1_9?oldid=1751299"
Community content is available under CC-BY-SA unless otherwise noted.