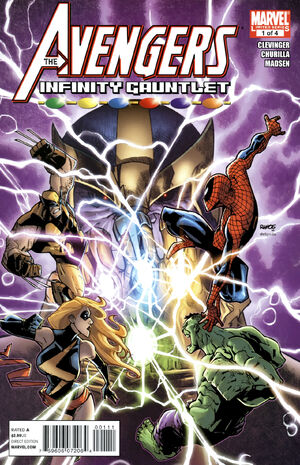 The evil THANOS has acquired the Infinity Gems, granting him control over the entire universe. He’s destroyed half the population of all worlds. The only force standing in his way? THE AVENGERS! But how can a ragtag group of heroes and villains (!) overpower the unstoppable? Check out the non-stop, pulse-pounding, white-knuckling action brought to you by Brian Clevinger (Atomic Robo) and Brian Churilla (Rex Mundi, The Anchor)!

Retrieved from "https://heykidscomics.fandom.com/wiki/Avengers_%26_the_Infinity_Gauntlet_Vol_1_1?oldid=1411906"
Community content is available under CC-BY-SA unless otherwise noted.