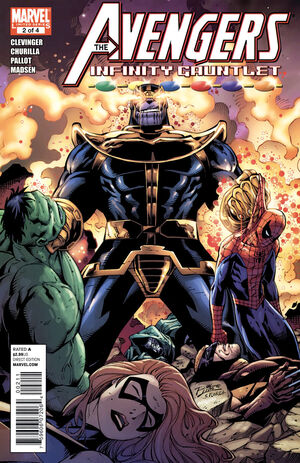 FILLLLLLHERRRUPPPP!!!! Half of Earth's super heroes have vanished, and an all-new team of Avengers have assembled to find them. Ms. Marvel! Wolverine! Spider-Man! Dr. Doom!...wait, wha-HUH!? But faster than you can say "BACK STAB" the team rockets into space to save their lost teammates. But first things first: they're going to need gas. Space gas. Only one man can help: the meanest mother trucker in the galaxy, US ACE! So pop a squat at the Star Stop

Retrieved from "https://heykidscomics.fandom.com/wiki/Avengers_%26_the_Infinity_Gauntlet_Vol_1_2?oldid=1411907"
Community content is available under CC-BY-SA unless otherwise noted.