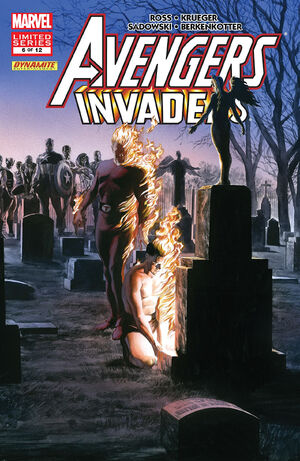 The titanic team-up of the year continues! With the time-tossed Cap and Namor held by Tony Stark and his Mighty Avengers, Toro and Bucky are off-the-grid under the protective wing of the New Avengers… while the Torch finds himself in the presence of the most powerful threat to the Marvel Universe, whose identity is revealed in this issue!

Retrieved from "https://heykidscomics.fandom.com/wiki/Avengers_/_Invaders_Vol_1_6?oldid=1639020"
Community content is available under CC-BY-SA unless otherwise noted.