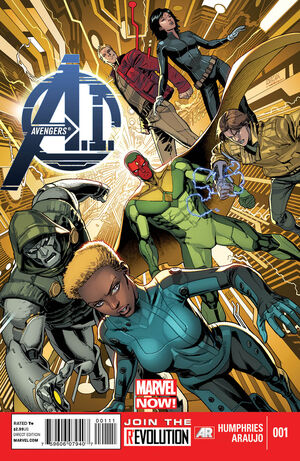 After the virus with which Hank Pym destroyed Ultron evolved into the A.I. known as Dimitrios, S.H.I.E.L.D. agent Monica Chang was given the task to find a way to stop the evil artificial intelligence after it started mounting cyber attacks against secure military and intelligence targets.

She ordered Hank Pym to help her destroy this new threat, for which Pym created a new team of Avengers: the Avengers A.I.. During their first mission they faced hijacked S.H.I.E.L.D. drones which attacked a hospital in Atlanta, and managed to find the mysterious person the drones were looking for before they could find her.

• The triumph of Hank Pym turns to tragedy for the human race...an unfathomable Pandora’s Box of destruction!

• When a brave new world is unleashed, only one team of Earth’s Mightiest Heroes can save us from the future – AVENGERS A.I.!

Retrieved from "https://heykidscomics.fandom.com/wiki/Avengers_A.I._Vol_1_1?oldid=1411894"
Community content is available under CC-BY-SA unless otherwise noted.