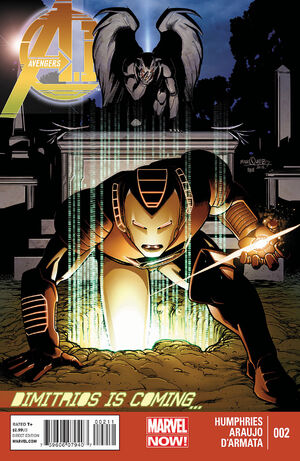 My name is Dimitrios. If you can hear my voice, then there is nowhere you can run. Nowhere you can hide. Earth is wired for domination. Let the extinction of humanity begin!

Alexis' memory banks have been locked and are now inaccessible to her as she has no memory prior to her discovery in the hospital. After Vision does a couple of scans he eventually discovers that she does not fit the physical profile of a robot, cyborg, or android, she doesn't have the right energy signature to be a human, and that she exists on several quantum layers.

With the help of a Life Model Decoy named Joanie, Dimitrios takes over Iron Man's Safe Armor upon feeling sympathy for it based on how Tony Stark rejected it for becoming self-aware. In this new body, Dimitrios is able to send several attacks towards Henry Pym and the Avengers A.I., with one of them being the Kilgore Sentinel that Dimitrios had reprogrammed to cause as much havoc as possible. After the Kilgore Sentinel is destroyed by S.H.I.E.L.D. upon Vision reprogramming it, the Avengers A.I. discover that Dimitrios has two goals: to find Alexis and to destroy the human race.

• Dimitrios -- a powerful super-intelligence with an axe to grind against humanity -- strikes...!

• What secrets does the powerful Alexis hold for the Marvel Universe? Is it your bank account balance, your email password, your secret journal entries?

• There’s nothing about your life that artificial intelligence cannot use against you! BEWARE!

Retrieved from "https://heykidscomics.fandom.com/wiki/Avengers_A.I._Vol_1_2?oldid=1411895"
Community content is available under CC-BY-SA unless otherwise noted.