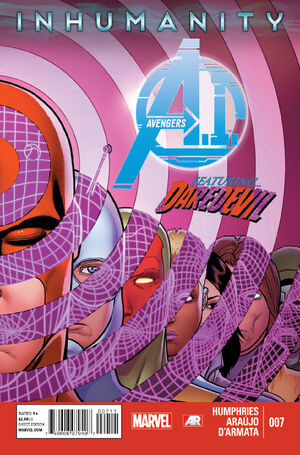 The Avengers A.I. encounter an elderly widow named Doris who then turns to attorney Matt Murdock for help after her bank forecloses on her home. After being exposed to the Terrigen Mists, she is transformed into an octopus-like creature with masses of tentacles in place of arms. She attacked the Avengers A.I. before being persuaded to stop by Doombot. Doris then took off for parts unknown with Medusa.

• Cleaning up New York in the wake of INFINITY, the A.I. find themselves at the mercy of…Grandma??!

• Daredevil + Ant-Man = a doctorate in Wisecracks and Hijinkery!