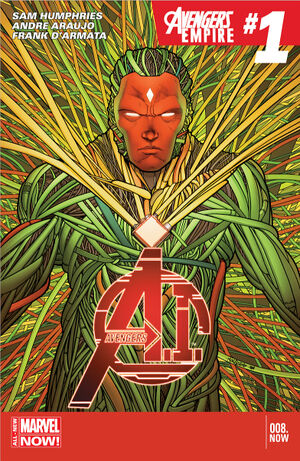 The war between organic and artificial intelligence destroys the world of tomorrow, starting in AVENGERS A.I. 8.NOW! Dimitrios, the vengeance-seeking scion of Hank Pym and Ultron, downloads death and destruction across the planet in his quest to eradicate civilization. The Vision and his robot Avengers team up with the UNCANNY AVENGERS to rescue humankind from the precipice of extinction!

Retrieved from "https://heykidscomics.fandom.com/wiki/Avengers_A.I._Vol_1_8.NOW?oldid=1411905"
Community content is available under CC-BY-SA unless otherwise noted.