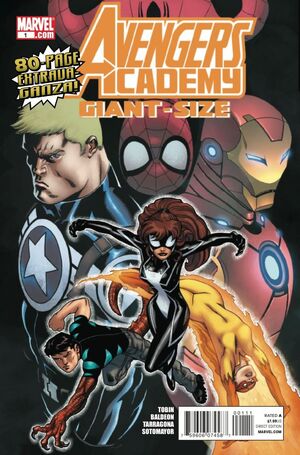 HUMONGOUS-Sized Issue...Guest-starring The Young Allies! The traps are set and the dice are rolled as the vibrantly villainous Arcade decides to rebuild his tarnished reputation...by setting his sights on the “easy pickin’s” of the Avengers Academy and the Young Allies! But when one of his teenage victims escapes, is it a setback for Arcade, or all part of a master plan to turn the entirety of New York into... Murderworld?

Retrieved from "https://heykidscomics.fandom.com/wiki/Avengers_Academy_Giant-Size_Vol_1_1?oldid=1725384"
Community content is available under CC-BY-SA unless otherwise noted.