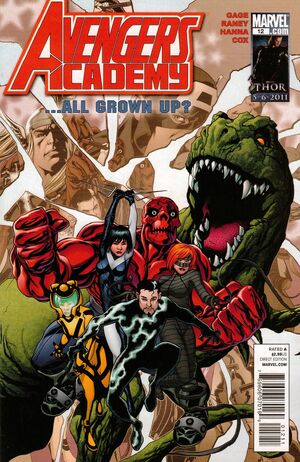 Appearing in "Put Away Childish Things"Edit

Korvac has defeated The Avengers...now the world's only hope lies with the students of the Avengers Academy, who have been grown to adults! With time manipulated, the team gets a glimpse of what the future might hold for them. For some it's a revelation...for others a life sentence! Can they overcome their personal demons and master unfamiliar abilities in time to defeat a foe powerful enough to conquer Earth’s Mightiest Heroes? Find out in the book that Newsarama’s Best Shots calls “one of the best Avengers books – and, for that matter, one of the best Marvel books – on the stands.”

Retrieved from "https://heykidscomics.fandom.com/wiki/Avengers_Academy_Vol_1_12?oldid=1726229"
Community content is available under CC-BY-SA unless otherwise noted.