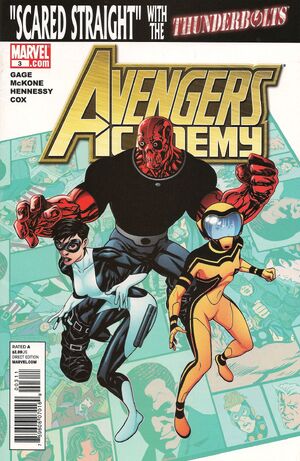 Appearing in "Scared Straight - Part 1: Boyfriend In a Coma"Edit

Guest-starring Norman Osborn and the all-new, all-deadly Thunderbolts! You've heard of "Scared Straight"--when impressionable teens are brought inside a prison to get the harsh truth about criminal life from the inmates themselves. Well, the Academy kids are about to experience it super-villain style...courtesy of Juggernaut and the new Thunderbolts program! But it's another inmate that captures their attention...the man who imprisoned, experimented on and tortured them: Norman Osborn! When The Raft goes into lockdown, are they trapped inside with him, or is he trapped inside with them? Plus: the origin of Hazmat! And guest appearances by Luke Cage, Iron Fist and Valkyrie! Don't miss the next chapter in the most unpredictable Heroic Age title of all!