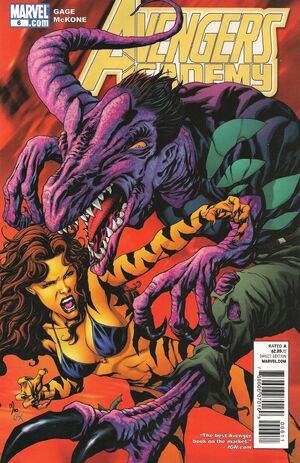 Appearing in "I Dreamed a Dream"Edit

Reptil goes Jurassic on Tigra! When Humberto is elected class leader of Avengers Academy, it should be a dream come true…but instead it's a nightmare! As he struggles with the weight of his repressed grief and anger, added to the responsibility he feels to keep his teammates on the heroic path, something's got to give...and it might just be Reptil's humanity! Plus: more on Quicksilver and Finesse, the villainy of Mentallo, and another Avengers guest appearance in the series that Comic Book Club Live hails as “All of the fun of ‘90s New Warriors with a dark side.”