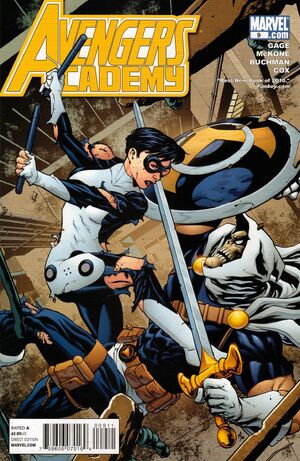 Appearing in "Teach Your Children"Edit

Guest-starring Taskmaster! As the fallout from Tigra's shocking act last issue rocks the Academy, Finesse goes in search of the man who could be her father...the character readers have demanded since issue #1...Taskmaster! Be here for the explosive reunion in the book that IGN.com calls “the best Avenger book on the market.”

Retrieved from "https://heykidscomics.fandom.com/wiki/Avengers_Academy_Vol_1_9?oldid=1726697"
Community content is available under CC-BY-SA unless otherwise noted.