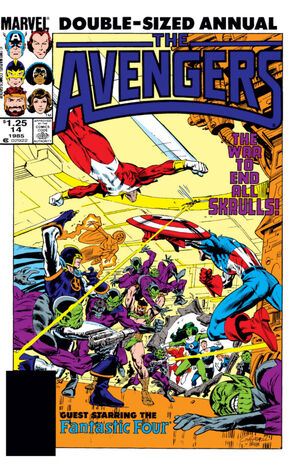 ... We will find Nebula and bring her to justice!

In search of Nebula, the Avengers and the Skrulls visit the planet Kral, on which Skrulls have taken the form of 1930s American gangsters, where they encounter Prince Dezan, the late Skrull emperor's brother, until recently an imprisoned exile. He has been freed for his knowledge of those who now menace the Skrulls, his one-time fellow rebels, Zabyk and Myrn, who intend to unleash a powerful secret weapon, the hyperwave bomb. The Avengers ultimately join forces with the Fantastic Four, also on Kral on a separate mission, but neither group can prevent Zabyk from firing the dreaded weapon. To everyone's surprise, however, the bomb affects only the Skrulls, robbing them all of their shapechanging powers.

Retrieved from "https://heykidscomics.fandom.com/wiki/Avengers_Annual_Vol_1_14?oldid=1493134"
Community content is available under CC-BY-SA unless otherwise noted.