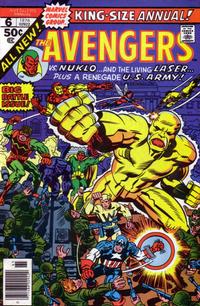 Appearing in "No Final Victory!"Edit

Synopsis for "No Final Victory!"Edit

While exploring the city on his own the Vision materializes in the middle of a street and avoids being injured in by increasing his density before being hit by a truck. When the police arrive on the scene they take the furious truck driver and the Vision into the police station to explain the situation.

At the same time, Whirlwind uses his scientific know-how to turn a pack of cigarettes into a bomb that blows open a hole in his cell allowing for him to escape and plot revenge against the Avengers once more.

The ruckus caused by Whirlwind's escape alerts the Vision to the situation. When Whirlwind attempts to attack the Vision, the android easily defeats him by utilizing his density powers and his solar energy weapons. With Whirlwind defeated, the truck owner continues to complain about the damage done to his truck.

No longer amused with the situation, the Vision tells the driver to call Tony Stark and he will be reimbursed for his troubles and flies off.

Whrilwind previously appeared in Marvel Feature #9. He will appear next in Avengers #164.

Retrieved from "https://heykidscomics.fandom.com/wiki/Avengers_Annual_Vol_1_6?oldid=1659003"
Community content is available under CC-BY-SA unless otherwise noted.