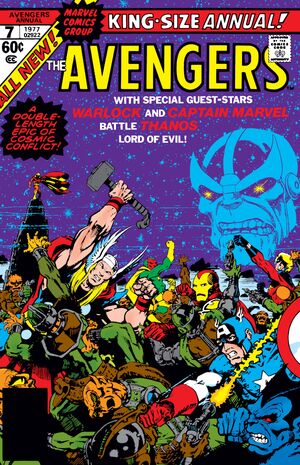 My life has been a failure. I welcome its end!

Appearing in "The Final Threat"Edit

Synopsis for "The Final Threat"Edit

Captain Marvel and Moondragon arrive at Avengers Mansion, closely followed by Adam Warlock, who reveals that Thanos has returned, gathered the energies of the six Soul Gems in a giant synthetic jewel, and plans to snuff out the stars themselves. The heroes rocket into space to stop Thanos's approaching armada. Even as they combat a horde of aliens foes, Warlock finds his companion, Pip the Troll, murdered, and absorbs his spirit into his Soul Gem, as he had done earlier on finding the dying Gamora. Warlock and Captain Marvel then locate Thanos, and Mar-Veil is knocked unconscious as he smashes the villain's energy-projector. Then Warlock and Thanos clash, and the golden-skinned hero falls. At once. Thor arrives to engage Thanos, while Iron Man destroys his artificial soul gem. Foiled, the Titan vanishes. Nearby, an astonished Captain Marvel watches as a second Warlock appears from the past and absorbs the spirit of his dying present self. Warlock awakens to find himself reunited with his friends in a world of peace and happiness within the Soul Gem itself.

Retrieved from "https://heykidscomics.fandom.com/wiki/Avengers_Annual_Vol_1_7?oldid=1410313"
Community content is available under CC-BY-SA unless otherwise noted.