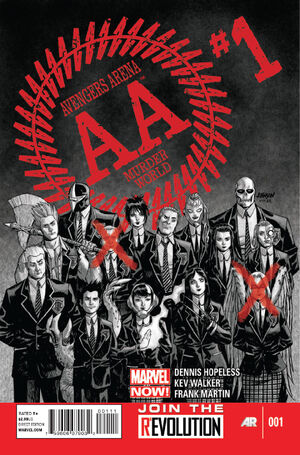 Oh my god, shut up! You are the worst bad guy ever! Like we're all really going to line up for your idiot death match just because you beat us up some? We're teenage super heroes, dumbass! We get beat up all the time!

16 super powered teens were taken by Arcade to Murderworld to fight each other to the death.

Arcade seems to have sufficient technology to physically capture and hold all 16 of them. After releasing them from stasis, some of the teens attacked Arcade but to no avail. The teens stopped when it appears that Arcade can't be defeated. Arcade instructs the teens that if they want to survive they will have to kill for it.

Arcade then decided to kill Hazmat who continues to openly defy Arcade. But Mettle, who is also Hazmat's boyfriend, sacrificed himself instead and was killed by Arcade.

Now, 15 teens remain, who will be the next to die?

Welcome to Murder World, where the secrets are plenty, alliances are fleeting, and the key to victory might be rewriting the rules of the game. Who will survive? The rising star team of Dennis Hopeless (X-MEN: SEASON ONE) and Kev Walker (THUNDERBOLTS) dare you to tune in to your new favorite comic NOW!

Retrieved from "https://heykidscomics.fandom.com/wiki/Avengers_Arena_Vol_1_1?oldid=1412100"
Community content is available under CC-BY-SA unless otherwise noted.