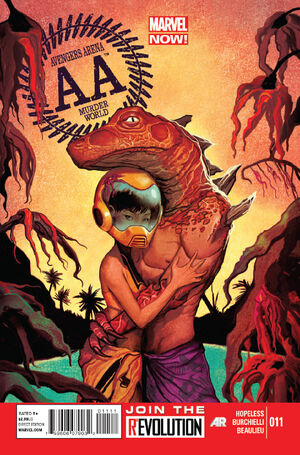 Appearing in "Game On, Part 4"Edit

Synopsis for "Game On, Part 4"Edit

Reptil turns into a sea dinosaur in order to hunt some sharks for him and Hazmat to eat for the night. The remaining teenage heroes catch up to them and are invited to have shark steaks with them. Cullen Bloodstone confronts Reptil about their camping out on the beach while a war's going off elsewhere. Cammi interjects to agree with Cullen Bloodstone before saying she's heading out to either find Nico or avenge her. Reptil heads back to shake Hazmat out of her funk. The issue ends with everyone finally agreeing to go break out of Murderworld together.