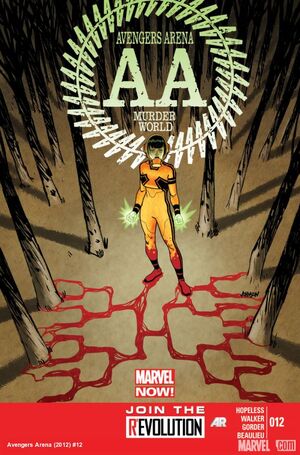 Appearing in "Game On, Part 5"Edit

Synopsis for "Game On, Part 5"Edit

The Staff of One resurrects Nico Minoru where it used her massive blood loss as a sacrifice to grant her enough power. Nico uses this power to disarm Deathlocket, destroy the Darkhawk armor, and defeat Apex by trapping her underground. While also underground, Deathlocket comes across an underground facility where she finds rooms of food and medicine, an aquarium, and a mysterious room containing the bodies of Christopher Powell, Juston Seyfert, Kid Briton, Mettle, and Red Raven.

• Apex squares off in bloody battle against...you’ll have to see it to believe it!

• What does Death Locket see on the very last page that will freak you out?

• Plus: Arcade makes popcorn to eat while watching the big fight! Oh, what a jerk!

Retrieved from "https://heykidscomics.fandom.com/wiki/Avengers_Arena_Vol_1_12?oldid=1412111"
Community content is available under CC-BY-SA unless otherwise noted.