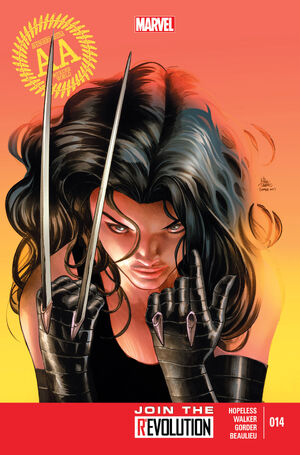 The remaining teens continue to go throughout Murderworld to find each other. Cullen Bloodstone gets frustrated and attacks Anachronism forcing Cammi to try to calm him down while Nara led Anachronism away. Cammi convinces Cullen to tell her about his 'ugly secret'. It is revealed that Cullen spent 2 years trapped in an alternate dimension where he was possessed by an unknown creature and in order to keep the creature at bay he must keep on his family ring on at all times. Hazmat and X-23 end up encountering a Mettle robot with Trigger Scent causing X-23 to go on the attack. X-23 seriously injures Hazmat leaving her fate unknown. Aiden is upset about Cullen wondering what his problem is when Nara reveals that he has a big crush on him. Trigger scent surrounds them and X-23 comes attacking them Aiden and Nara run to warn Cullen and Cammi but Nara falls and Aiden tries to help her up leaving them both vulnerable. Cammi attempts to stop X-23 but her attempts are useless. Cullen decides only he can stop her. Upon removing his family's ring, Cullen transforms into a monstrous form in order to save them.


• Issue #14: It begins here, the last story arc of Season One! The contestants have fought one another, now can they put aside their feuds and battle Arcade?

Retrieved from "https://heykidscomics.fandom.com/wiki/Avengers_Arena_Vol_1_14?oldid=1511203"
Community content is available under CC-BY-SA unless otherwise noted.