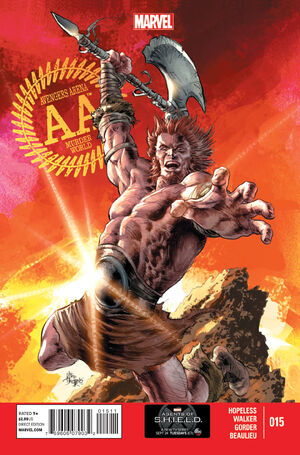 As Cullen Bloodstone's monster form continues to fight X-23, Cammi, Nara, and Anachronism look for Cullen's ring. Anachronism tells the group that Cullen is the form of a Glaratrox (which is a parasitic monster that engulfs someone's soul and feeds on fear). When the ring is knocked into the ocean, Nara ends up diving into the ocean to find it. Nara recalls when her parents were part of Namor's Royal Guards where they were actually on Attuma's side. Her parents end up killed as Namor tells Nara to trust herself. Upon going to the surface world, Nara is enrolled at the Braddock Academy. Back in the present, Anachronism tells the group about what Cullen told him to do in the event that Cullen loses control of himself. Nara emerges from the ocean with the ring which attracts Cullen's Glaratrox form who ends up killing her. Cullen's Glaratrox form is subdued by Chase Stein, Nico Minoru, and Reptil enough to regress him back to his normal human form. Cammi tells him Nara saved him and Cullen looks up to pay the favor only to see Nara dying in Anachronism's hands.

Retrieved from "https://heykidscomics.fandom.com/wiki/Avengers_Arena_Vol_1_15?oldid=1412114"
Community content is available under CC-BY-SA unless otherwise noted.