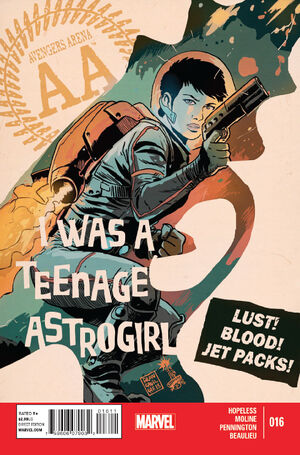 Arcade speaks to his robot about the progress in the teenage heroes' fight against each other.

Meanwhile, Anachronism ends up attacking Cullen Bloodstone in retaliation for Nara's death as Cammi tries to break up the attack. Reptil states that they should help as Nico tells him "no." Cammi ends up resorting to blasting Anachronism to make him stop. Meanwhile, Deathlocket and Apex end up going further into the lair where they are attacked by Arcade. During the fight, Christopher Powell (who is revealed to still be alive) is awakened when Deathlocket releases him. Christopher then attacks Arcade and manages to knock him out.

• Up on Murder World Island, it’s the surviving contestants in an all-out battle royale!

• Down in Arcade’s lair, it’s two other contestants vs. Arcade!

Retrieved from "https://heykidscomics.fandom.com/wiki/Avengers_Arena_Vol_1_16?oldid=1412115"
Community content is available under CC-BY-SA unless otherwise noted.