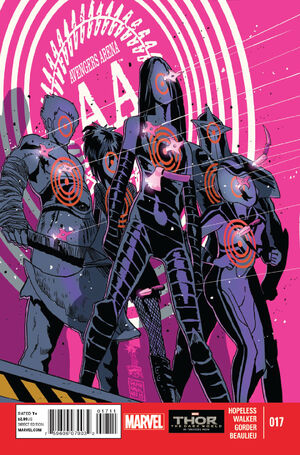 As chaos ensues throughout all of Murderworld, Anachronism attacks X-23 only to be subsequently attacked by Reptil. Cammi battles Chase Stein where he steals the Darkhawk Amulet from him and becomes "Cammihawk" to stop Nico from killing Cullen Bloodstone. In Arcade's lair, Apex, Deathlocket and Christopher corner Arcade who ends up teleporting away. When Apex tries to hack Arcade's computers, Arcade talked Apex into letting the game play out in order to position herself as the sole survivor. Apex uses her ability to take over Deathlocket's systems and makes her attack on Christopher. Although Apex plans to become Queen of Murderworld, an overloading Hazmat threatens to destroy it.

Up on Murder World Island, it’s the surviving contestants in an all-out battle royale!

Down in Arcade’s lair, it’s two other contestants vs. Arcade!

Retrieved from "https://heykidscomics.fandom.com/wiki/Avengers_Arena_Vol_1_17?oldid=1412116"
Community content is available under CC-BY-SA unless otherwise noted.