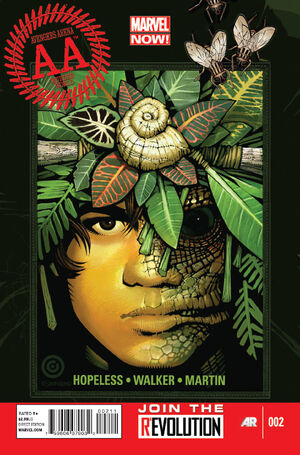 My dad says life is complicated--until yours is on the line. He says if you back somebody all the way into a corner--you can watch their whole life boil down to multiple choice. Fight. Or flight. Dad says no matter which one you pick--or how it turns out--the rest of will be defined--by a split-second decision. Another thing dad likes to say people worry too much about making friends-- when what we really need are allies. "Friends make you weaker, sweetheart. Allies make you stronger." I wish daddy were here so I could ask... what does being alone make you?

As the games begin, Red Raven begins panicking from stress and tries to escape from the arena via flight only for her to be killed when an invisible force field breaks her neck and causes her to crash to the ground. Rebecca Ryker faces off against Hazmat and then fights Cammi soon after. Cammi gives her the nickname Death Locket. Throughout the first day, Death Locket remembers the past events that led to her origins. She joins the Braddock Academy group (consisting of Apex, Kid Briton, Anachronism, Bloodstone and Nara) despite death threats from Kid Briton and Nara. Death Locket started bonding with Apex as she introduces her to the rest of the Braddock Academy.

• Who the heck is Death Locket? And who dies in this issue?

• Plus: Who are the students of the Braddock Academy?

Retrieved from "https://heykidscomics.fandom.com/wiki/Avengers_Arena_Vol_1_2?oldid=1546952"
Community content is available under CC-BY-SA unless otherwise noted.