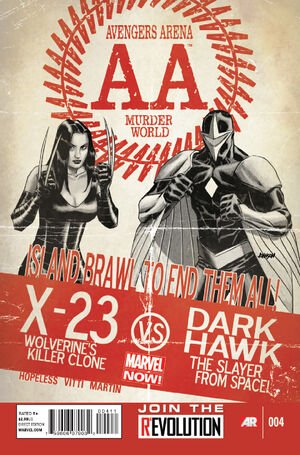 After several days have passed in the arena, Arcade seemingly shuts off the food supply making survival more difficult. Chase and Nico manage to survive by creating a tree bearing magical fruit, but decided to team up with the children of the Avenger's Academy. The alliance stabilizes everyone until Reptil gets severely injured by a large blast of fire from the woods. X-23 and Hazmat blame Chase and promptly kill the fruit-bearing tree. Nico decided she couldn't trust Chase anymore and left him alone in the woods, where he stumbled upon Darkhawk's amulet. The amulet buries itself into his chest and transforms him into the new Darkhawk.

Retrieved from "https://heykidscomics.fandom.com/wiki/Avengers_Arena_Vol_1_4?oldid=1412103"
Community content is available under CC-BY-SA unless otherwise noted.