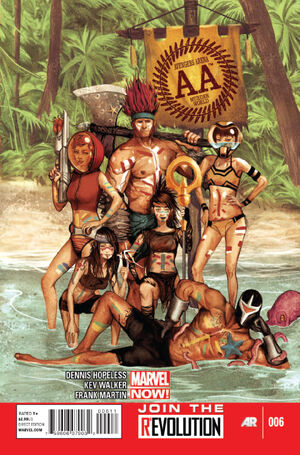 Nobody ever told me a lot about girls. Dad was so busted up after mum left, his thought on the subject were mostly anger and confusing. Spent a lot of my life playing the round-bellied ginger boy who likes to listen. Girls told me their troubles, treated me like the harmless pup I was. But not Nara. She treated me like scum from the start. Made a game out of it. Tried to break me. I used to hate her gut. But now-- well, everything's different now-- isn't it?

Reptil, Hazmat, and X-23 are still trying to get to the edge of quadrant 2 for medical supplies. Reptil is finally feeling well enough to walk and shape-shift. Hazmat initially tells him not to expend any energy they have left and that they will leave no one behind. Just then, Hazmat activates a cloud of smoke, engulfing the three. When the smoke dissipates, it's revealed that the smoke is trigger scent and X-23 goes feral, attempting to kill Hazmat and Reptil. Reptil shapeshifts into a Pterodactyl and evacuates Hazmat away from X-23. Arcade then comments on how his new trigger scent was a success and how amazed he was that X-23 would kill anyone with it on them. Nara, Anachronism, and Bloodstone manage to survive falling into the chasm and come to the conclusion that Apex is manipulating Death Locket and Kid Briton to her own ends. The trio is then teleported by Arcade to the supply cache at Quadrant 2 just as Apex, Death Locket, and Kid Briton arrive. Nara and Apex start arguing and Apex confirms that she was the one who ordered Death Locket to attack Nara. Kid Briton tries to intervene as Nara continues calling him a "weak puppet." An irate Kid Briton attempts to kill Nara for insulting him only to be beheaded by Anachronism.

• Who will win the race to the supplies...and what are they willing to do get there first?
• Who is not what they seem...and which player will draw first blood?

Retrieved from "https://heykidscomics.fandom.com/wiki/Avengers_Arena_Vol_1_6?oldid=1412105"
Community content is available under CC-BY-SA unless otherwise noted.