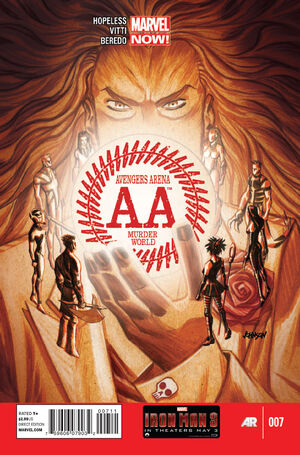 Arcade begins to reflect on the events that led up to him kidnapping the teenage superheroes. Throwing a party at his estate for his birthday, Arcade realized he was constantly made fun of by the super-villains community and was wounded by his new assistant Miss Coriander after having asked her to try to kill him. He then gives his Murder Island to her and flees to his bar called the Hole in the central parts of Bagalia where he was burgled by Constrictor (who was one of the villains who had made fun of Arcade). Arcade defeated him with a large hammer-like trap. Arcade decided to create a new project inspired by children's novels. Helped by Miss Coriander, he created a new Murderworld in Antarctica and was provided with powers from cybernetics, magical enchantments, Stark Industries tech, and gamma radiation.

Retrieved from "https://heykidscomics.fandom.com/wiki/Avengers_Arena_Vol_1_7?oldid=1412106"
Community content is available under CC-BY-SA unless otherwise noted.